Literary Lion–The Motion of the Ocean

As a way of keeping my brain alert and to get myself some much needed practice writing fiction, I have decided to participate in a weekly writing activity prompted by the Literary Lion.  My piece can be no longer than 400 words long. This week’s theme was WATER.  I hope you enjoy.

Giving a little cough, she rolled over to her back and stared up to the sky. One arm moved up her body until the back of her hand covered one eye. Thoughts flittered through her mind of how she got to be there at that very moment and on such a stunningly beautiful, perfect day.

She stared up until she was almost in a trance and decided that the sky was such a special shade of blue that she doubted she could ever describe it to its full grandeur.  The sun was so hot she was already dry—it was as if she had never gone in. She wondered if she would ever go in again.

He was still down there, of course.  Never passed up a chance to dive.  He was forever telling her that there was no better feeling than being down in the cold water, listening to your own breath, shut off from freely communicating to others and just being in the moment.  Visiting a new world.

She could see how he would enjoy such a sport, he was usually so quiet and introverted anyway, but it wasn’t an idea she had ever been comfortable with.  Too many bad case scenarios had haunted her dreams about diving and she wasn’t ready to put any of them to the test. So, she’d decided on snorkeling instead.

When she had gone in she had been able to see him way down below—the water couldn’t have been clearer—and felt a tinge of jealousy. Maybe she’d made the wrong choice.  He was getting to see so many marvelous things…

She rolled back on to her side and gave a little moan.  No, it was best that she didn’t go diving, after all.  The movement of the ocean had been so soothing and so lulling but had quickly become discomfort and pain.

She soon discovered that fish would eat pretty much anything.

The contrast of feelings she’d had was immense–sweet comfort of release from her rumbling stomach and intense fear from the thrashing of hundreds of cool, scratchy bodies rushing around her trying to consume what she had let go.  New memories for her mind to torture her with when she next tried to sleep.

The boat kept time with the ocean.

Leaning towards the crystal clear water she fed the fish again. 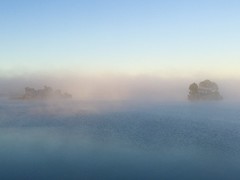