When it rains it pours!  Just after creating my own blogging award, I was nominated for a couple of different awards by some of my blogging friends.  I always love answering questions and I appreciate that the people that nominate me think they would like to hear more about me.  Thank you to @Coolbeans4 for nominating me for this award.  This photo is definitely going on my front page.

What to do for the award:

The question that I was posed: If your house was on fire and you could only save one thing (excluding family members/pets) what would it be? Or, in a less wordy way, what is your most treasured possession? (and yes, I did totally steal this question from an episode of Modern Family).

Not that I spend all my time thinking about all of the terrible things that could befall me day to day, but I have known the answer to this question for quite a long time.  Would I run and save all of the important family documents that would be invaluable in helping me fix or buy a new house when the old one was destroyed? Practical, but no.  Would I run after Grandma’s china–the set I inherited after she passed away? Sentimental for sure, but waaaay to heavy.  No, that doesn’t even make my top ten.  What about invaluable family photos that can never be replaced?  Well, maybe.  Okay, yes.  Those would be something I would run for, depending on where they were in the house.  But, I think that’s an easy answer because a lot of people would want to try to save things like that. I want to pick a purely selfish item and I have just the thing–my jacket. 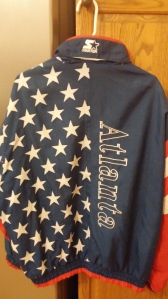 It’s not just any jacket, but a 1996 Atlanta Olympics jacket that I have actually owned since 1996. Did I go to Atlanta to get my jacket? No, I was just moving in with my boyfriend and we could barely afford rent.  A good friend of mine bought one each for me and my sister, and maybe one for herself, I don’t really remember. It was one of my most favorite items right from the beginning.  So bright and vibrant, I love to wear it everywhere.  People come up to me and ask me if I was there for those games and I would love to say yes (so I could then spin a fantastical yarn about my experience) but I just can’t do it.  Damn it.

My love for the Olympics has been cultivated by my parents since I was born.  Every four years we would sit in front of the television to watch coverage. There was only the one channel airing the games and that’s where the television stayed for two whole weeks. Nowadays you can watch the Olympics on something like 10 different NBC stations and still not see them all.  I appreciate them giving it the old college try.

I hope with all my heart that my hubby and I can get to the Olympics one day.  Salt Lake back in 2004 was our best bet, but we still couldn’t afford the prices.  If I could only choose one thing to see live it would be the Opening Ceremonies, without a doubt.  I would plan a trip that had us near the Olympic Village the week before the games (where I would buy all of my official USA gear), go to the Opening Ceremonies, and then fly back home (real home, not hotel home).  Not sure if I have really internalized what it would actually cost me to make such a trip, but I have investigated ticket prices (and unless I got a really lucky number in the ticket lottery) it could be up to $4,000 a person–and that’s not even from a re-seller!

Yeah, leaving after the first day would be a good idea.  I know that I would prefer to leave the crush of people coming into the area and then be in my own house in front of my own television for the coverage.  (You get to see a lot more events and you don’t have to sell various body parts to earn the money to get there.)

An official adult back in 1996, I just didn’t have the means to get to Atlanta.  But I watched as much coverage  as I could and I still contend that they had one of the best Opening Ceremonies ever televised.  I was watching when Muhammed Ali lit the cauldron at the beginning of the games and I watched shocking video showing the Olympic Park bombing.  It was the best of times and the worst of times.  My jacket makes me feel connected to that time and place and to everything Olympic related.  I just love it.

So there you go. First I would save my boy and my hubby, make a good effort towards getting the family pictures, and then grab the jacket.  It’s still in great shape and I plan on wearing it for many, many years to come!

Now to pass on the award.  This is always tough for me because I want to hear from everyone.  I am going to go random this time and pick five of my followers.  Feel free to participate but don’t feel that you have to if you don’t want to!

Your question is: If you could only listen to one album for the rest of your life what would it be and why?

I look forward to seeing your answers. I hope you have a great day.

I am a retired Children's Librarian, mother of one, life observer, and commentator. There is no rhyme or reason to my posts other than a need to say something about something. Smile!

Follow a funny thing happened when I was learning myself on WordPress.com

© René Bohn and afunnythinghappenedwheniwaslearningmyself.com, 2015. Unauthorized use and/or duplication of this material without express and written permission from this site’s author and/or owner is strictly prohibited. Excerpts and links may be used, provided that full and clear credit is given to René Bohn and afunnythinghappenedwheniwaslearningmyself.com with appropriate and specific direction to the original content.
Loading Comments...
%d bloggers like this: