Have I Become a Successful Coward?

I wish that I could walk across the United States just once. None of that Forrest Gump back and forth bullshit for me–just one good trip to see if I could actually do it. How many miles would I be able to put in before I was ready to call a limo company and grab an air conditioned ride to the nearest town? Would I be able to triumph mind over matter when I inevitably came to the moment where I would systematically tear myself down for being the biggest loser on the planet because I forgot to bring a hat and my inner thighs were creating enough friction to start a sizeable grass fire?

Could I really walk long stretches of road and feel that I wasn’t going to a) get eaten by a starving cow in the middle of nowhere, b) have my head smashed in by a random piece of burning rubber stripped from the inner wheel of a semi-truck, or c) be kidnapped by some random person that spontaneously decides that I look like I could provide three or four healthy meals for him (and his family)? Short answer—no. Of course, no. That kind of idea takes planning, determination, ambition, and lots of lots of guts and, quite frankly, I only do one of those things very well.

As someone in her forties I have gotten really good at feeling bad about what I am not able to do. Is it wrong to think that I should be able to do everything in the world and actually be good at those things? On any given day I can convince myself that I could be an excellent karate student (if only I wasn’t required to kick and punch things in front of other people). I know I could get on stage and belt out an amazing song that would make people give me a standing ovation (if only I didn’t have to open my eyes and look at any of those people). Hell, I could even stand up and perform a one woman comedy act (as long as I was using somebody else’s jokes instead of my own). I have a million reasons to try new things, but only one thing that keeps from doing them—fear.

It’s actually a miracle to think that I have managed to become an almost fully functional adult human. I’m not sure if the standards are very high to become that kind of a human, but I figure I’m able to think, grow, learn, teach, live, and afford my own non-generic ice cream (I’m looking at you Ben and Jerry) so I feel pretty damn proud of myself. You’d think I would be able to celebrate those achievements and find some kind of inner peace, but you’d be wrong. I’m still looking for more, and for the life of me I can’t figure out what it is.

Okay, that was a flat out lie. I know what it is. I want to not be scared. I want to jump out of an airplane and live to brag about it. I want to try out for a musical at my community theatre and have fifty of my closest friends show up to cheer me on. I want to write a book that at least one person likes and go to the city that they live in and talk about it. I want to ski down a mountain from top to bottom without having to plow my legs until they feel like they weigh a million pounds each. I want to have the confidence to do a three minute striptease. But…

I weigh so much the parachute won’t hold me and I can’t go try out for community theatre because I’ve never done it before and I don’t know how to read music. I keep trying to write a book but what if no one likes what I have to say, and how do I find an editor anyway, and all these how to books tell me that there isn’t a chance in hell of being successful. It’s probably too cold to be skiing the mountain and what if my legs get so tired that they can’t keep me from smashing into a tree? And as for the striptease? Let’s just pretend that I never said anything. That’s just better for us all.

The hell of it is that I’ve done things. Scary things. First off, I’m a mom. Nothing scarier than that, I promise you. How am I going to keep him alive? Am I teaching him the right things? Is he going to be an upstanding citizen or is he going to hurtful to others? Will he live through tomorrow? My heart is constantly beating fast when it comes to being a mommy but I’m doing it and it feels pretty good. I know that I can screw things up in an instant, yet I keep on trucking. It’s amazing to know that I have it in me to do that. To know that I have courage. But maybe it’s because I don’t have a choice but to BE brave and if that’s the case does it make that bravery any less valid? And why does it even matter?

Just to prove that I’m not just a one trick pony, I’ve also managed to do things like ride in a helicopter, zip-line, and snorkel with piranha (okay, it was with small fish in Hawaii—don’t judge) but those moments only come in spurts. I manage to do enough cool things to convince other people that I’m badass and brave, but it’s all pretty innocuous and milk-toast when it comes down to it. I want to be the real deal. But isn’t it too late for me to be thinking about these things when I’m almost up to my ass in pre-middle age (and is that even a thing?).

I’ve decided that the answer is no. I am going to continue to try to be brave and I am going to keep getting better at it. I think. No, I will. I have to. It’s getting to hard to look myself in the mirror knowing that I have these barriers inside of me that keep me from reaching my full potential. I know I’m a good person, but I want to be great. I know that I do a good job at a lot of things, but I want to be the best. I am going to keep drooling over all of the people that have been successful by letting go of their fear and I am going to place stories of their success front and center in my brain. (And probably the walls in my exercise room because that’s where I do most of my dreaming.

So watch out world. Someday soon you’ll probably see me streaking across a football field, rappelling down the side of the Stratosphere, or trying out for the Dallas Cowboys cheerleaders. And if not, know that I’m thinking really hard about it and it’s only a matter of time. My steps might be small but they’re heading in the right direction. 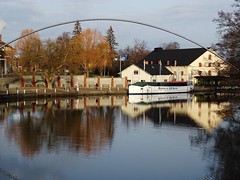