My (Not So) High Flying Adventure!

A few years ago I participated in one of the scariest events of my entire life.  I had spent the month before in agony trying to decide if I truly had what it took to be strong and attempt the bravest thing I would ever decide to do.  I knew that the payoff would be pride in the accomplishment, peace within myself and soaring to dizzying heights, but it was so hard to take the first step.  It was so hard to believe that it was finally possible…to try indoor skydiving.

Exhilaration achieved without jumping out of a plane!  Doing something crazy in a safe environment. I was super excited about all of the great things I was going to do.  Bring on the wind machine!  No problem.  Who needs to breathe anyway?  Bring on the ups and downs and spinning around!  I knew people would be watching—Hell, they would be making a video of the whole damn thing, so I didn’t worry about looking like a fool.  Hardly the day goes by when I don’t make an idiot of myself, so that isn’t what was giving me night terrors.  It was the suit–the tight one piece suit that I was required to wear for the occasion.  The suit that I wasn’t sure was going to fit.  The suit that I couldn’t be sure wasn’t going to tear the minute I zipped up the front.  That was the biggest fear of all.

I had just recently reached a weight goal that I had been working on for a long time and I knew that when I reached that milestone that I would finally make my reservation to do indoor skydiving.   Knowing that the weight restriction was a bit more suitable for me than real skydiving (and as if I would ever throw my body out of a plane) I made sure to sign myself up right away.  And no way was I going to go it alone—my hubby, nephew and sister-in-law joined in too.   We were all going to revel in the joy of flying, floating, whatever, together.

We first got placed into this room where we had to watch a short video and then practice some of the moves we just witnessed.  Lying down on my stomach across a low table-like structure (I have no idea what it was) I had to lift my head, pull my arms back and bend my legs.  I felt like a really fat turtle trying to turn over.  But it was okay because I could actually move my body more than usual that day, and if the instructor had told me that I would have to perform the perfect back bend in order to make the skydiving work, I would have totally done it.  (The key is Excedrin!)

Feeling a little more nervous about what was going to go down, they took us out of the room and led us over to the wall of doom (I mean, the wall of flight suits) to get our uniforms on.  Everyone got a suit on right away and I kind of hemmed and hawed, because who wants to find out that they’re too fat for the suit?  I took off my shoes and stepped into the leg holes.  I shimmied the suit up over my butt and attempted to get my arms in the arm holes.  Umm, it pretty much wasn’t going to happen.  I mean, unless I decided to snap my arms off at the shoulder sockets to get them in.  I bent down to adjust the suit around my legs and inched more fabric up my body.  After doing a couple of severe lunges and butt curls (I’m sorry but I just don’t know how else to put that) I pulled the suit up enough to fit my arms in.  Success! 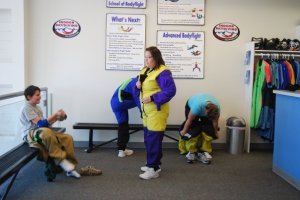 Bending my knees a few times just to make sure all was well, I attempted the zip up.  I turned to the wall, sucked in my gut and started to pull the zipper up.  Fine, good, past the tummy, past the boobs, okay, up to the neck and—Yay!  It worked.  Now I looked like a huge banana.  I was not attractive, not comfortable, and not excited to be wearing it, but it was all good.  I was pretty much home free.

It was essentially one of those times when I was very confident in my choice of activity until I was forced to watch one after another entering the wind chamber.  Up, down, up, down, around, up, up, up, down, down, down…over and over again until there was only one person in front of me.  My heart began to beat faster as I realized that it was my turn.  The wind was so loud and there were so many people watching me.  The gentleman in the tube with me was pretty small–would he be able to hold on to me and keep me from flinging into the fans?

Of course it was much ado about nothing because I had the absolute time of my life.  I kind of felt like Charlie Bucket and Grandpa Joe in Willy Wonka and the Chocolate Factory when they drank the fizzy lifting drinks–except a thousand times louder.  I made sure to keep my head up and I tried my best to let the guy know that I wanted to go up, up and away!  The best part was that I finally forgot to be worried about my body, my clothes and my nervousness.  I felt like a whole new person and I was very thankful for it.  My only complaint is that is was only two minutes long! 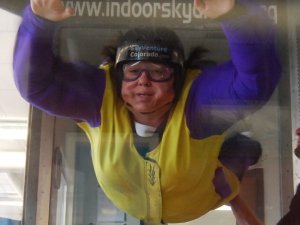 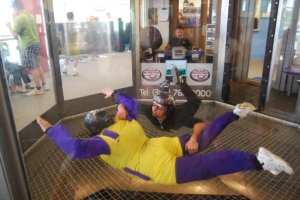 I think once or twice about going indoor skydiving again because my son is very interested in giving it a try, but I’m really not so sure.  I’m afraid that my mind is in even worse shape now than it was back then.  But I do think about it.  I can’t contemplate a much better way to bond with my boy than flinging him into a tube of air and hoping that he has as much fun as I did my very first time. 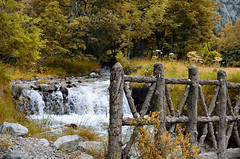