Chainsaw Murderer to the Rescue

I love Halloween.  I love it so much that I have no problem proclaiming it my favorite holiday of the year.  It’s kind of funny how this could even be possible considering I despise fall, I don’t care for much anything flavored pumpkin, and I don’t really get much enjoyment from scary pranks or costumes.  I do, however, love coming up with fun costume ideas, planning Halloween parties for my family and for the library, and going to corn mazes.

When I was younger it was a hell of a lot easier for me to get in the mood for a good old-fashioned haunted house.  Back when they were good for at least one decent scare and a couple of rooms of complete grossness or terror it was scary fun that caused me to breathe a little quicker and dart my eyes around the room more, but all in all, something that I could walk away from thinking, “Damn, that was fun but scary” and still be willing to come back for more the next year.

Then somewhere around twenty years ago the haunted houses went from a little scary fun to full of terror and mayhem.  I was still foolish enough to think that visiting one of these torture chambers would be a fun night of entertainment and would say I would go—I mean, I loved hanging with my friends, and if that was where they wanted to go then I was in.  Dumbest idea ever.

The first really terrifying experience I had was at this place that I can’t even remember what it was called.  It was in our dilapidated local mall and had rock music blaring out everyone’s eardrums.  The really “modern” decorations of the haunted house that were the talk of the town that year were these life-sized electric chairs that had a disgusting scary guy that would fry like bacon whenever someone flipped the switch.  People around me were jumping and screaming in between the “oh so cool” guys that stood around with bored looks on their faces, convinced that they could conceive something better.  And all that for just fifteen dollars a person.  Fun.

Already past the point of no return (no one is going to see me chicken out in the middle of something like that) I slunk my way from room to room, hugging the walls when I could and making sure that someone was always in front of me to use as a human shield (hey, I had to look out for number one).  The worst rooms were the ones that were completely dark and silent and I had no idea from where the sneak attack would occur.  How I did not die of a heart attack when I was eighteen is still a mystery to me.

As you can probably tell from reading some of my previous stories that I have one hell of an imagination.  I think the problem I was having with these haunted houses was the power that I was giving them before I ever got inside.  Rationally I knew that I wasn’t going to REALLY get murdered inside the haunted house, but irrationally I was convinced that some psycho paid his fifteen dollars to get inside, snuck away from his group, hid behind some bloody hay bale holding a machete, and was waiting to find the most gullible person in the world (me) to actually murder in front of a live audience.  I feared people screaming and then laughing and then walking away as I gasped my last breath on this earth.  It’s all just in good fun, right?!

No, no, no, I was never going to do the haunted house thing again.  That edict held out for about all of three years, until new friends and family members wanted to give it a try, and an icky sense of “wussy-ness” was creeping in to my psyche making me feel like a complete tool.  I had to suck it up and try it again.  This time it was in an old barn in a (then) undeveloped part of town that was hosted by a local radio station.  Music blaring from the station’s van blared in the parking lot and hundreds, yes hundreds, of people stood in a massive line to get inside the haunted house while suffering near freezing level (okay, more like 50 degrees—enough to see your breath, anyway) temperatures.  Plenty of time to think long and hard about what might be waiting for me inside.  This was my first foray into the haunted house/chainsaw murderer story line and I have really never been the same since.

I had managed to make it through the freezing rooms cordoned off in the large barn, but I was not prepared to have to make a run for my life in what amounted to a human pen with all kinds of knives and monsters and screaming and bad, bad people chasing after me.  It was the only way out.  It was the only way to stay alive.  I managed to get halfway through by hugging the wall, but then I heard the chainsaw roar to life and I lost my shit (almost literally!) running like I had never run before.  I don’t know what he/she looked like, I don’t know how close that person was to me—I just know that I would have run over a helpless old lady if she had been blocking my way out.  My friends had a freaking field day with my terror, of course, and after a few minutes I could appreciate the humor in the situation but those first few minutes after were so full of emotion and clarity that can probably only be felt by someone who truly thought they had just seen their last moments of life.

After that, I decided that I wasn’t going to do the haunted thing never ever, ever and my resolve lasted slightly longer than before when I was once again (manipulated? I say manipulated) asked to go to a haunted corn maze with family and friends.  I knew deep down in my bones that there would be someone with a chainsaw and yet I decided to go anyway (there’s nothing you can call me that I haven’t called myself) because it “was going to be fun.”  This time I was going in with my sister-in-law who also had a real fear for the chainsaws.  We were going to keep an eye on each other.  Ha. Ha-ha.  (It was every woman for herself!)

This was my first (and only) time going into a haunted corn maze.  I can’t really explain how I didn’t compute that the word “maze” implies a place that is hard to get out of with lots of dead ends.  The start of the event was innocuous enough with a scary guy here or a scary girl there and my heart did start racing, but it was more because of what I didn’t know what still lay before me and the realization that I didn’t have a clear exit strategy should things get a little hinky.

One of the things that I remember the most about this experience was the bright lights.  I guess I figured that a haunted house would be scarier in the dark and just assumed that everyone else would think so too and therefore all haunted houses would be dark.  This particular place was so flooded with lights it was like walking around in the early afternoon.  It made me put my guard down just a little bit (I’m so, so sorry to say) and by the time the chainsaw murderer finally made an appearance, I was already more than halfway convinced that I was going to get away scot-free.

My sister-in-law and I were going through the maze basically grabbing onto each other’s jackets when that terrible sound roared out of the stalks of corn.  I jumped up and tried to run like Scooby Doo (a full foot above the ground) but it wasn’t meant to be.  The chainsaw murderer got closer and closer and the two of us tried to scramble away from the threat when our legs got tangled up and I tripped face first into the rocky dirt.  She managed to get a little ways ahead of me when she noticed that I wasn’t exactly jumping back to my feet to get the hell out of the maze.  I couldn’t move, couldn’t think of anything but pain really, because my nose had slammed so hard on the ground that I was convinced that it was broken.

My pain was so acute in that moment that I didn’t realize the chainsaw sound was getting closer and closer.  I knew that people around me were really worried about the fall and concerned with how I was feeling but I wasn’t expecting the chainsaw murderer to be worried as well!  I looked up into the face of one of my biggest fears and he was asking me if I was okay!  He was huge and scary and scary and huge, but he was so very gentle and nice and stretched out his hand to help me up and then he made sure that I was put back together and led in the right direction to the exit of the corn maze.  I can honestly say that I had met the absolutely nicest chainsaw murderer ever.

Luckily my nose was not broken and I was able to enjoy the rest of my night.  But it was the last time I ever went to a haunted house or a haunted maze.  Even knowing that there are nice murderers out there I just know that it’s not something I feel good about and I don’t need to put myself through mental hell just to hang out with my friends.  I figure I’ll be the one getting some hot chocolate and caramel apples from here on out (very acceptable ways of enjoying Halloween) while everyone else is getting scared to death. But (sigh) never say never.  My son is going to be a teenager in a few short years and I may have to suck it up just one more time… 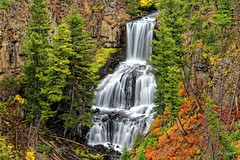