My mornings actually start at night. I cherish my time alone when the boys are asleep so much that I am willing to stay up until almost 2 o’clock in the morning on a work night. I will set up shop on my couch, watch at least one episode of Colbert or Dallas Cowboys Cheerleaders, take a quick ½ hour nap, eat a bowl (or two) of ice cream and then pretend I’m getting into shape by squeezing an hour on my elliptical while watching Fifty Shades of Grey. (Okay, I’m actually working out, but I’m not sure it counts after the two bowls of ice cream—although to be fair, they were small bowls.) You may be wondering what time to those boys go to sleep, anyway?! Well, in the summer time the sun is still shining and I’m probably outside laying down, still working on my tan, as they tuck themselves in. I love my family to death, but the minute I can shut them all up into their rooms (dog included) I am able to relax, stretch out and mindlessly laze my life away in a supremely proper manner.

The downside to this lifestyle choice, however, is that I have a hell of a hard time getting myself out of bed every morning. The hubby has already been up since the butt crack of dawn and is usually the one to wake me up with a goodbye kiss. I mean, I think he’s the one giving me a kiss. I don’t really open my eyes to find out. I figure it’s a good start to the day to make sure I get “be careful” out of my mouth and into his ear before he leaves the room. Then it’s just a matter of if I really care whether or not my son gets to camp or if I get to work. Most summer days I really, really don’t care about either, but I’m a responsible person and I should really be able to get up and go, be productive, and allow my son to meet people and grow as a person. Pfffffft. I’d let him lay in one spot in his room, growing God knows what in his unwashed underwear for weeks at a time if I thought for one second I could get away with it. But I can’t, damn it, and I have had to learn how to pull up the big girl panties and just Adult the shit out of my life.

But this one particular day was a difficult. The sun was shining in my face, practically daring me to get up and enjoy the day, and I took supreme enjoyment in flipping my window the bird and telling it to fuck off. But it was so insistent that I could no longer find a nice cool spot on my sheets to curl in and fall back asleep. I threw back my covers and grudgingly began my day. At this point, I have to say that I really hate having a dog that loves me so much. Oh, he’s awesome and all but the little dude is my mini-stalker and wouldn’t leave me alone for the two minutes I needed to get my son thinking about getting out of bed. He ran around my legs like someone just wound him up good and tight and then just let him go. I managed to not trip over the little nerd but it soon became apparent that I was going to have to lock him out of the boy’s room. You’d think the dog would be a good tool in my arsenal to get him out of bed, but I don’t really want to squeeze in a trip to the ER when a good eye gets scratched out by an overzealous dog. Dog out, mom in, and the cajoling could commence.

Luckily enough, the boy was more than willing to get up and go. It’s extremely rare when this happens and I milked it for all it’s worth. I’m happy, I’m the morning cheerleader, and I’m telling him that he’s going to have the best day ever! He doesn’t believe me, but I don’t care. Let’s get this show started. What do you want for breakfast? What do you want to watch on television while you’re eating your breakfast? Are you only going to be wearing your underwear to breakfast? Push, push, push, go, go, go… then I realize that his willingness to get up and go was just an aberration.

He suddenly went limp and couldn’t decide what he wanted to eat. He started looking through recorded shows to see what there was to watch—which, of course, there wasn’t one he liked. He stumbled around the house trying to remember where he put his Chromebook when he finally decided to sit down to eat. Way to help the day along, son! Whatever would I do without you? I basically grabbed a cup of milk, a handful of mini-doughnuts, some vitamins and called it good. I still maintain that this is a healthy breakfast. I managed to get calories into his body and not berate him because he was dragging so much butt. I call that a win-win in the breakfast department.

We were starting to get very tight with our schedule because I was hyper aware that he needed to be at camp by 9 am in order to make the bus for the day’s field trip. There was no time for much more than an (obscenely) long cool shower to get me started for the day. I know I was pushing the whole time thing for the kid but, let’s face it, that vibe doesn’t exactly apply to me.  I’m not good for anyone if I can’t my shower time in. I know I can be in and out in five minutes but I’ve got to have something to live for, people! I calculated exactly how long I could stay in until I absolutely had no more time to work with, and I stayed until that exact moment. I toweled myself up, yelled to the boy to get dressed (again), wash his face and brush his teeth–and then I began my morning ritual. Unfortunately, I looked down to my phone to find out that I miscalculated my timing only to realize that I was already 15 minutes behind. Oh, joy. Things were bound to get pretty interesting.

As the boy grumbled around trying to get himself together, I had some very mom-like things to take care of to make the day happen. I ran to the kitchen, toothbrush in mouth, and started to get a lunch packed. I was far too lazy to have a nutritional lunch prepared the night before, so I ran around like a mad woman throwing in any pre-packaged item I had in the house into his lunchbox. It wouldn’t do to have to stop and put peanut butter on some bread—mommy ain’t got time for that! It’s not like it matters what was in there anyway—the little dude would just trade it all for a half-eaten Kit Kat anyway. But the box was nice and full and a quick glance by camp counselors would show how much I loved my kid. Mission accomplished.

I realized that we (well, it should just be him) still needed to take the dog out for a quick walk before we left for the day and I started to lose my shit. I badgered the boy to hurry up until he started yelling at me because I was messing him up from tying his shoes. (Grrrr, who the hell decided not to buy the Velcro kind?!) I threw a swimsuit, towel, and lunchbox into his backpack and hovered over his head until he was ready to go. We leashed (is that even a word?) up the dog and took the fastest morning walk in the history of my life—which is negligible because I could probably still get lapped by any moderately in shape person using crutches for a broken foot. I threw the dog into the house, grabbed the backpack and managed to find a second to sunscreen the boy up before getting him into the car. We had to go now! It was 8:20 am and I just didn’t know what the traffic was going to be like…

I was feeling better when we finally got on the road, and I started to relax. The boy asked me where he was going swimming that day and I didn’t have a clue. I did remember that I had a copy of the schedule on my phone so (at a red light—I’m not completely careless) I pulled it up so he could read it to himself. As I handed it back to him I noticed that at the bottom of the day’s schedule were the words: The bus for the field trip leaves promptly at 8:30! MOTHER F*##&#&#&#&!!! I told the kid to hold on and I drove (just a smidge) faster than light speed to get him to camp. The clock in my car registered 8:28 am and we were still a bit away, with a few (slightly frustrating) lights to deal with. I drove with enough caution to make sure that no one died, but fast enough that if someone really wanted to they could (rightly) report me to the police for reckless driving (but only if they could get a good look at my plates as we were zooming past. Ha!).

We made it to the day camp and we noticed all of the kids were still outside playing on the grass in their little pink day camp shirts. It was 8:34 am and they hadn’t left yet! I was simultaneously relieved, pissed, and more than ready to let the kid be under their expert tutelage for the day. We calmly walked inside and I gave my baby a big hug and a huge “I’m sorry.” He scampered off to play with his friends as I headed back to my car and a much needed return to normal.

However, as I began my drive to work, I realized that in my haste to get the boy out of the house I had forgotten my own lunch. Shit. With a heavy sigh, I turned back and drove home only to find out that I never made myself a lunch in the first place. In the interest of time, I grabbed one of the dog’s (unused) poop bags and began to throw things in. I threw in cold leftover wings, a diet Pepsi, two cheese sticks, a box of blackberries, and a package of Pop Tarts. I still maintain that this was a healthy lunch. And the fact is, I knew I was just going to leave it in the fridge at work and go to Taco Bell anyway!

It’s a lot easier to be separated from my manic life moments for a while and then take a minute to look back and reflect on the choices I’ve made in life. For all the drama and the frustration I put myself (and my family) through everything seems to work out just fine. It may take a little longer for us to re-bond as a family each time something like this occurs (and lots of feelings are hurt) but we get through it. We’re a team. It’s all good! (But, I just have to say, I’m getting way too old for this shit!) 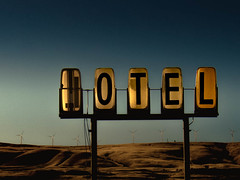